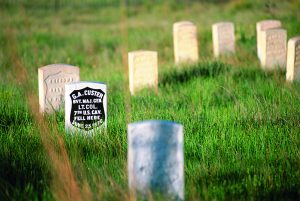 This area memorializes one of the last armed efforts of the Northern Plains Indians to preserve their way of life. Here in 1876, 263 soldiers, including a Lt. Col. George A. Custer, met their deaths at the hands of several thousand Lakota and Cheyenne warriors. Little Bighorn Battlefield National Monument is the site of the June 25, 1876, battle between the U.S. Army’s 7th cavalry and several bands of Lakota Sioux, Cheyenne, and Arapaho.